This week TechCrunch published a provocative article about the end of golden era of startups. We’ve seen 20+ years of unprecedented human connection and creativity. But the domination of the big platforms can stifle innovation and close the door for small players for a long time.

Here’s a nice description of where we are from the TechCrunch article:

The TC article shown us how screwed we are. The bigger those behemoths are the more data they gather and the faster they do it!

It means that the the shift to AI-powered economy will not be available to majority of people. It will not be as opened as the internet revolution was. It’ll happen inside those enormous silos that the biggest companies have become.

Now it’s known that wild technological innovation happens whenever technology gets cheap and available enough that anyone can play with it in their garage. That’s when breakthroughs happen. Will we even have a chance for it in AI era when all the data is closed inside of silos.

On top of that we have the biggest of concentration of power in history. We recently saw that Facebook can be used to sway US presidential elections. And it’s becoming more influential every day.

The explosion of creativity and changes internet has brought was (is?) an incredible opportunity. Never before humans had the possibility to put their own creations out there and make them available to such vast audiences. It was a epic mess as well. A good mess! But why did it happen?

That was enabled by brilliant protocols behind the internet. They been devised long before majority of us even heard about the web. Things like TCP/IP, HTTP, DNS, Email were the foundation of the network. All the protocols shared one characteristic: decentralisation.

Email and DNS are designed in such a way that everyone can setup their own servers and host their own data or offer those services to the public. This means participation and competition. The way HTTP and subsequently HTML was designed was - again - messy, but liberal. It was a conscious choice of the creators of the web that there will be no central points of “approval” of the content. They let everyone publish whatever they want of the web.

Social Network is a Protocol

The thing is that Facebook and Twitter are actually protocols. I mean they should have been. What Facebook did so well was they digitised and own social networks that exist in real life. They proprietary and closed. They’re centralised.

This cartoon by the Oatmeal shows the problem brilliantly: 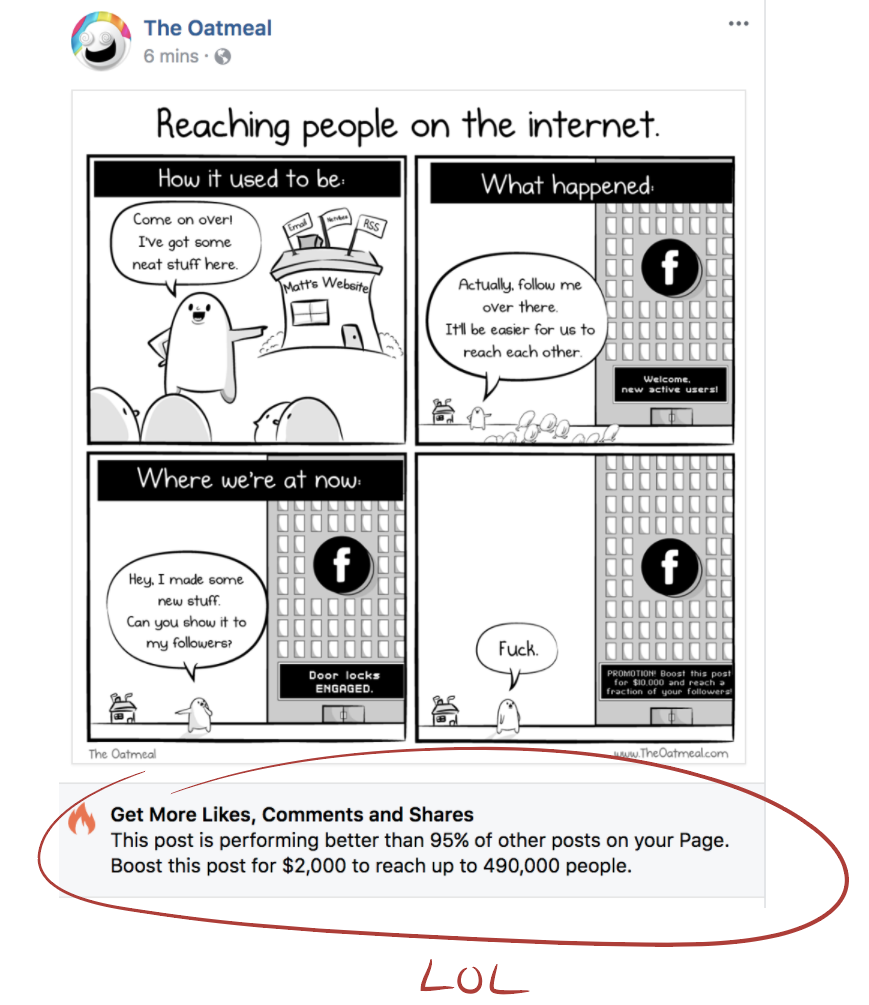 Technically it’s possible to have a decentralised social network where everybody can setup their server, host their profile and interact with everybody else. There are working proposals and proofs of concept that never gained traction. Perhaps this should be mandated? There’s more voices that the huge network monopolies should be regulated. If that’s the case, I’d rather have the regulation done on the protocol level and data level rather than any other way.

Imagine Facebook, Twitter and LinkedIn are ordered to open up their data via peer-to-peer protocols, enabling everyone to compete on even grounds. Think of all the possibilities it would create! It sounds exciting, doesn’t it?

The Nightmare of Shipping - The Mercedes AMG Video

I recently shipped a video I made for a competition. It was…

Apple has shown us a lot of new, sleek technology on Tuesday.…